Since the start‐up in 2005 the band has evolved and the music has made tremendous leaps forward. With well arranged theatrical live performances with Therése breathing fire among other things, contribute to a solid live act which has proven to be very appreciated at the Nordic music festivals.

performed at Sweden Rock Festival, receiving great credit and recognition from the audience.

Disdained also won the Stockholm finals 2010, including the category "best guitarists" at the

festival which attracted a lot of attention from record labels, radio stations and music magazines.

Niklas Dahlin (Guitar) and Tomas Stolt (Bass) have previously released three albums with the power metal band Insania (Stockholm). Lead singer Therése has previously worked as a theatre actress and has collaborated with several well known Swedish musicians. Johan Persson (Drums) has played in various constellations mainly in south‐eastern parts of Sweden with members from Satanic Surfers amongst others. Johan Hartman (Guitar) has prior to Disdained mainly been on the non‐mainstream scene focusing on progressive self‐indulgence.

The official video for "I live for you pain", released on YouTube in the fall of 2012 gained a lot of

international interest and with eager fans in USA, Russia, India, Indonesia, Japan, China, Germany etc awaiting the release of the debut album “Kill My Only Enemy” and the video of

“I live For Your pain” to be aired internationally by Metal Central TV among others, Disdained is destined to make an heavy impact on the metal scene. 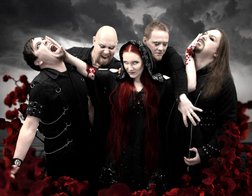